Here’s an excerpt from Bleeder,  book #3 in the “Behind the Mic Mysteries.” Lisa is in the KWLF newsroom when scanner traffic blows up about a domestic violence call:

“Two Paul 13 in route,” crackles back, as one patrol officer acknowledges the call from the second shift, primary unit in Beat 13.

“Two Paul 14.” A female officer responds from the nearby Beat 14.

DV is a police abbreviation for domestic violence, and one of the most dangerous calls for many officers. Technically, according to a DV prevention counselor I interviewed two years ago, the statistics don’t really bear that out, yet cops continue to believe it.

Law enforcement may consider DV cases challenging considering an angry abuser often wields lethal weapons, that women and children are typically involved, and that officers often risk their lives to save a badly battered person, only to see the couple reconcile with no charges filed.

“I think that’s an Ocotillo house. Nice neighborhood, south of Queen Creek.” I point to the general area on the wall map above the scanner. “Want us to roll?”

David slides his chair to the edit bay door and sticks out his head, awaiting instructions.

“You two need to be safe…” Grant looks conflicted, the deep lines on his aging face creased with worry.”

David hesitates a moment, waiting instead for our boss to give the final approval. Grant nods and David lumbers out of his seat and heads to the gear room.

I grab my leather bag with recorder, microphone, notepads and other paraphernalia needed for my job as crime reporter for the small station in the Southeast Valley of the Phoenix metropolitan area. I lucked into this job, following a “shadow day” during college, and after hanging around and going out on stories with the other reporters until I graduated. That’s when Grant hired me full time and I’ve loved the adrenaline-rush-with-different-stories-every-day job since.

“Meet you at the van,” I shout at David, and take the keys from the wall by the back door. I figure if I drive we can get there faster than the methodical and sloth-like David. He’s been at the station for years, and just doesn’t get excited about anything anymore. My nickname for him, in my head only, is “slow-mo,” which is short for the editing term “slow motion,” when audio or video is reduced in speed.

I speak the address into my cell phone’s GPS and it pops up on the screen. I toss my bag into the van, start the engine and drive up to just outside the door. David appears with his own gear bag, and he climbs in. We’re off.

The van’s police scanner is blowing up with additional updates.

They’re calling out more officers, as “Adam” refers to an “assisting” unit in Beat 13 working the second shift, where “Paul” refers to the primary officers on duty.

“Two Adam 13,” answers the officer, who must be close by.

More units are responding to the scene, as evidenced by patrol cars and unmarked vehicles blasting by us with full lights and sirens.

“Damn, that’s not good.” I pull over to let them pass but turn back onto the road as soon as I can.

We reach the street where the hostage situation is taking place, but already Chandler P.D. squad cars are blocking the entrance.

“You set us up to go live, and I’ll see how far I can walk in.” I park the truck, grab my bag and dash out of the vehicle, looking at and listening to the scene around me. In addition to the ear-piercing sirens, I hear shouting down the street, but I can’t make out words.

I break into a jog and head around a police department SUV. A patrol officer in blue puts up one hand.

“I’m Lisa Powers with KWLF News Radio, just want to find out what’s going on.” I try to power my way around him.

“I said, stay back, or I’ll arrest you for interfering.”

That stops me in my tracks. “Okay, okay. Got a PIO out here?”

“Not that I know of, but I’ll check. You wait over there.” He touches the microphone on his shoulder, but turns away from me so I can’t hear him.

I pull out my cell phone and look up the address of an acquaintance of mine, who I think might live close by. When I read her address, it’s just two doors down and across the street from the house in question. If I can make my way–

“You’re gonna have to wait for a PIO. Not on scene yet.” The officer stands his ground.

“All right, thanks for checking.” I turn back toward the KWLF van, but pop up my friend’s address on GPS and click the “walk” icon. It gives me a straight route down the street that is blocked, but I figure out a way around the back side of the houses and take off, dialing the woman’s number as I go.

“Judy? It’s Lisa Powers. We met when I was doing that story on the dead fish in the lake near your house, remember?” I can hear faint sounds of sirens through the phone line.

“Oh, yes, Lisa. Good to hear from you. Maybe you can tell me what’s going on down the street?”

“That’s why I’m calling. Police are responding to a house near you. I’m trying to get closer to the scene and wondered if I could come to your back door? I can update you on the latest.”

“Judy, stay inside, though, and don’t open your front door unless it’s for a police officer. I’ll see you in a couple of minutes.”

Meanwhile, here’s a scene from the studio recording session for the “Fade Out” audio book … complete with professional actors and sound effects! Now available through Amazon or Audible at https://tinyurl.com/FadeOutAudioBook 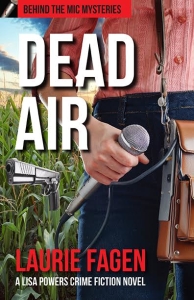 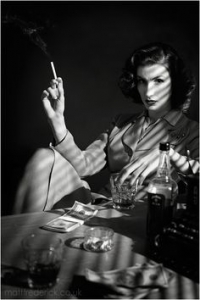 Here’s another excerpt from the murder mystery podcast in “Dead Air,” book #2 in the continuing Behind the Mic Mysteries. It’s a take-off of the 1940s “film noir” days with a “gumshoe,” or private investigator and a “dame,” or woman, complete with a glossary at the end. Only in my story, the dame is the private eye, and a gentleman needs her help. This is Episode #2:

The gent’s got sweat drippin’ down his forehead, nervous as a losing bookie at the track. He throws back the hooch and finally spills.

“Ain’t it always about a woman? But I wouldn’t figure a good-lookin’ cat like you would have lady troubles.”

“Now we’re gettin’ somewhere. So, she’s stepping out? Fooling around?”

“Oh, so you want me to find somethin’ on her so’s you can get a divorce?”

“You’re the one messin’ around? Spending time in a flophouse?”

The glass in my paw drops, shattering on the wood floor into a million pieces.