It was another amazing, heart-pounding and yes, very educational Writers’ Police Academy in Green Bay, Wisconsin.

This was my second WPA, and it was every bit as good as the first. From shooting a pistol and a rifle; to taking part in a “Shoot/Don’t Shoot” scenario; learning about death scene investigations from a medical examiner; getting interrogation tips from an LAPD detective; finding out what bugs can be used to kill people; identifying various legal and illegal drugs; to jaw-dropping details from a serial killer as told to a psychologist and much, much more.

Then there were t 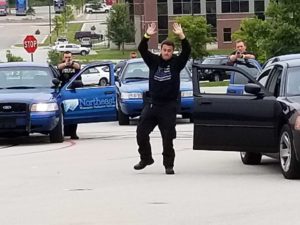 he “announcements.” To the uninitiated, i.e., first-timers, it’s the first order of business each day. But far from dry details, the first was a scenario of a police stop of a vehicle that turned into a “high-risk search” and ended in “gunfire” with a police officer “shot” in the leg and the responding officers, EMTs, etc. Attendees could hear the communication between police officers and the men in the car, and watch as it became an “active shooter” situation.

Another series of reenactments showed how quickly a perpetrator with a simple kitchen knife could run towards a police officer and the very small amount of time that is available to pull a weapon for protection.

Now, I grew up on an Iowa farm around guns, including pistols, rifles and shotguns. My father was an award-winning marksman in the Marine Corps, and thus passed along his skills along and safety advice to my brothers and I. Personally, I have never owned a weapon, and don’t intend to, but for crime fiction writing, have been anticipating learning as much as I can about the handling and shooting of various guns.

The 2017 WPA was no disappointment. I took part in live fire situations with a Glock handgun, the typical weapon for many police officers, as well as an AR-15 long gun rifle. We were instructed by staff from the Northeast Wisconsin Technical College International Public Safety Training Academy, who normally teach police recruits, but had their campus taken over by a couple of hundred writers. They were all about safety and were very cautious while working with us.

But it was fairly thrilling to feel the cool metal in my hands, put my eye down the sight, aim at a paper target of a “bad guy,” and pull the trigger, feeling the recoil and hearing the blast, despite double ear protection of ear plugs and shooting protective ear muffs. I know I’ll find a place to include that type of description in an upcoming story.

In my second “Shoot/Don’t Shoot” scenario, a huge screen rolls video with a scene that police officers might come across, from domestic violence cases to home invasions to a suspicious person holding a weapon. The idea is to show the split-second decisions many law enforcement officers must make while on the job. 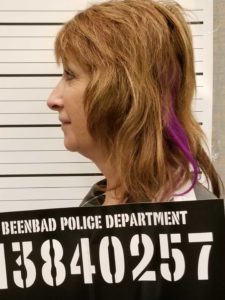 It’s another sure way to get the heart pumping. In a home invasion scenario, where I was to be a patrol officer called to the scene, the first part of the video showed three people suddenly running out of the house. Unfortunately, my first impulse was to “shoot” an unarmed civilian as he was fleeing. We ran the video again, and after the three leave, the video continues into a hallway where there’s a side view of a man in a white shirt yelling “I’m going to shoot you.” We can’t see what he has in his hands, or who he’s shouting at, but it certainly appears he is holding a weapon. After communicating with the man to drop his weapon, he turns toward me with the gun, at which time I shoot him. Turns out he is the homeowner who had his gun on the suspected home invader! Of course, I was horrified at both of my attempts, but the police officers running the “Shoot/Don’t Shoot” scene shrugged their shoulders and says, “It happens to police officers, too.”

I’ll write about more of the WPA sessions I attended next month. If you want information about WPA, visit www.writerspoliceacademy.com or email or message me. I’m glad to share what I’ve learned.

Meanwhile, have you attended other similar events for writers? Let me know and I’ll post details about them as well.