Just realized I didn’t get this posted last month! Here is part two of a multi-part series on the City of Chandler’s Citizen Police Academy, a free 13-week course to learn more about the Chandler Police Department :

The rate of homicides in Chandler has decreased in the past 10 years, when there were about a dozen in 2009. No murders have been reported so far in 2018.

Crimes against persons in the Chandler Police Department include homicide,

Det. Nathan “Nate” Moffat, an 18-year veteran police officer says he and his fellow officers have to “wait for the sky to fall in” when they’re on call and must be dressed and at the scene within 45 minutes.

“Crime scene processing is huge for us,” he says. “We don’t get a second chance.”

So, because Moffat says “no one can go in or leave a crime scene without leaving taking something with them,” they wear ample protection, including a “marshmallow man” white jumpsuit, hair net, face protection and gloves to handle evidence documentation, collection and packaging.

Patrol officers are typically first to secure a scene, then a crime scene photographer enters often with a detective, who documents evidence.

If a suspect is brought in for questioning, Miranda rights do not need to be given. Only when someone is in custody —and not free to leave — will they be Mirandized.

Interrogating suspects can be “exhausting,” says Moffat, who does his best to craft a question to “catch a lie.”

In his experience, a suspect who is innocent will start calm then get mad during questioning. A guilty suspect starts out mad, then chills out after a time.

Crime Scene Tech Kristilyn Baldwin has “seen a lot of crap” in her job with Chandler P.D. From assaults, to elder abuse to child abuse to decomposed bodies and vehicular accidents, she says she has a “crass sense of humor” to be able to be able to deal with working 10 cases a day.

CPD’s forensics services section has an accredited lab with mostly women “and one poor, lonely man” who include civilians, forensic scientists, criminalists and those who do latent prints and drug analysis.

When on a death investigation, which Baldwin says is rather like “an archaeological dig,” she says they treat “everything like a homicide.” Determining time of death, identifying blood spatter for trajectory and reconstructing a bullet’s path are just some of her duties.

There are a number of ways to lift fingerprints from all types of surfaces, from electrostatic dust lifter, to using superglue in a chamber. 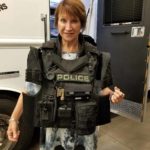